A downloadable game for Windows

DRAGON DEFENSE is a tower defense / pet simulation game about a band of misfit Monsters charged with protecting and raising a Baby Dragon! Defend against waves of Humans by strategically setting up Towers, send Monsters to find Food and Loot around the map, then give these Items to the Baby Dragon to raise its stats, change its look and grow its powers.

Can you survive until the Dragon becomes an Adult?

This game can be played entirely using a Mouse / Track Pad.

Click + Drag: Pan the Camera, Give Item to Dragon

The game alternates between Defense and Raising modes.

In Defense Mode, you are trying to survive Waves of humans by defeating them with Towers before they can reach the Baby Dragon. The Wave Indicator at the bottom of the screen shows what enemies are coming and when they will spawn on the map.

Left Click on any of your Towers at the top left box to pick them up and then drop them onto any grass tile. The circle around them will show how far they can attack. Some Towers do not attack but have interactions with nearby tiles (for example, Skeleton can place Walls if placed next to a path tile). Towers will automatically attack humans when they are within their range.

You can Left Click on any Tower to move them even after they have been placed. If you move a Tower to one of the Dispatch Zones on the top right, you send your Towers to perform Forage (find Food items), Reclaim (find Loot items), or Soothe (restoring Health and Mood of the Baby Dragon) actions. This will take the Towers off the field for a few seconds, but will give you useful benefits going forward. Different Towers bring back different Items, so experiment and see what you can find.

If you are not holding anything, move the Camera by clicking + dragging.

Sometimes your Towers won't be enough to stop the humans, that's when you can use one of the Dragon's Powers! You can do this by clicking on one of the Power Buttons to the bottom left and then clicking on the map where you want the ability to happen. Using Powers consumes Energy, so be strategic about when you want to use them.

If you survive all the Waves, you will go into Raising Mode. If however, the Dragon's Health goes to 0, then it is GAME OVER.

A Dragon's Health ensures its survival in Defense mode. A Dragon's Energy allows it to use Powers. A Dragon's Mood will determine its behavior.

A Dragon's Attributes of Strength, Dexterity, Intellect and Charisma determine the effectiveness of some of its Powers and when it is ready to grow to the next Stage.

A Dragon's Affinity determines its appearance and also the elemental nature of some of its Powers. Some Affinities are set in opposition to each other, so the Dragon can't be both a Fire dragon and a Cold dragon at the same time.

Be warned, however, every Dragon is unique and will have some Likes and Dislikes listed in the top right. If you give it something it Dislikes, it will NOT be happy!

Once you are done giving your Dragon items, hit the button to return to Defense Mode. Any Items that you did not give will be discarded.

Note: As this is a jam game, some of these features have not been fully implemented yet. Please wait for future iterations to fill in these gaps and allow you to raise different kinds of Dragons :) 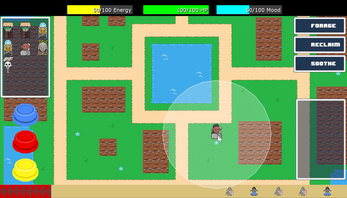 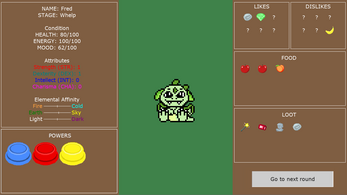 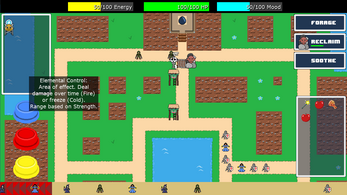 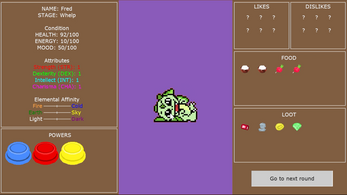